The Spanish pig sector has set the foundations of its own production model, that is the most rigorous one regarding quality standards, food safety, traceability, environmental protection and the care provided to the animals.

We have a strong and diversified production structure with a high level of technological development, a wide geographical implementation, and a balanced and sufficiently integrated sectorial food chain. All this makes us an absolutely basic and strategic sector in the context of the Spanish food system.

We are an essential industry.

At ACH we are proud of being part of a sector that generates 155,000 direct jobs, 172,700 indirect jobs and 99,500 induced jobs, according to a report drafted by International Financial Analysts (Analistas Financieros Internacionales, AFI).

More than 400,000 jobs that generate wealth and prosperity in the “emptied” Spain and that curb the depopulation of the rural areas.

As Alberto Herranz (Director of INTERPORC) says: “The importance of the sector is even greater in the rural areas, because most of the jobs are generated and preserved in small towns of the ‘emptied’ Spain, helping to keep the population and to support those regions by offering job opportunities and generating wealth in thousands of small towns”.

Exports of the Spanish pig sector

The continuation of the importance and the strength of the Spanish exports to the Chinese market still stands especially out. In the first semester of 2021 they have represented 52.1% (in terms of volume) and 46.6% (in terms of value) of all the exports of the sector in the said period.

In the first semester of 2021, in comparison with the same period in 2020, there has been an increase in the exports of this sector by 17.0% in terms of volume and by 14.1% in terms of value and, as a result of this, during the first six months of this year the sector has already exported 1,597 million tonnes with value of some 4,087 million euros.

Characteristics of the sector 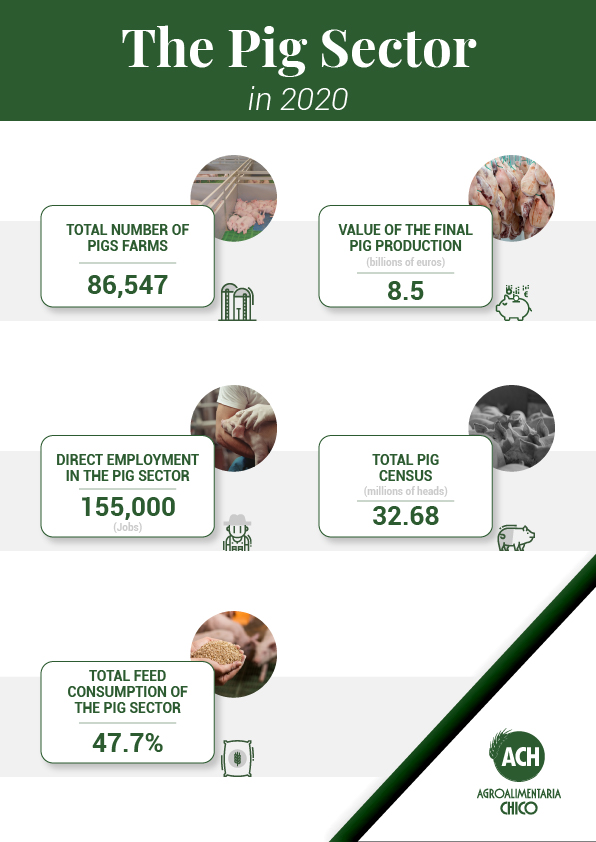 Sustainability of the pig sector and animal welfare

We, the professionals in the pig sector, are committed to the environment. We are the most interested in taking care of and protecting our environment because 45% of the pig industry is located in rural areas.

We reuse and recycle products to incorporate them again into the production chain, applying the circular economy in all the processes, because by preserving the environment we protect our activity.

Our progress regarding the environment and the good use of the natural resources become reflected in the data such as the drop in the use of water by 288% in the last decades or the decrease in the emissions of greenhouse gases (with a fall by 41% for each kg of pork produced since 2005).

In 2020 only 9.1% of the total emissions of greenhouse gases (GG) in Spain were produced by livestock farming, according to the Preview of the Inventory of Emissions of Greenhouse Gases (GG) [Avance del Inventario de Emisiones de Gases de Efecto Invernadero].

Regarding animal welfare, the use of antibiotics as livestock growth promoters is forbidden in Europe since 2006 (see Regulation (EU) No. 2019/6 of the European Parliament and of the Council).

And to guarantee and support the good practices carried out in terms of animal welfare, health, biosecurity, animal management and traceability in all the links of the value chain of the white coat pig breeds in Spain, INTERPORC’s IAWS seal of quality has been created. It is a seal that certifies the commitment of the sector to animal welfare.

Initiatives of the pig sector

We must spread to the society all the progress that the pig sector has reached in terms of sustainability, biosecurity, animal welfare, and our role as generators of wealth and the preservation of the population in the rural areas.

Farmers, veterinarians, carriers, and workers in the industry and distribution sector, work every day with a strong commitment with society, the environment and animal welfare. Our image as a sector is the sum of each of its workers.

At Agroalimentaria Chico we are devoted to the rearing, production and distribution of pork and Iberian and Duroc processed pork products. Pig farming is our passion and pride, and therefore we support all the initiatives that have been created to back the pig industry:

The pig sector can provide a real, effective and practical support in the implementation of the different strategies designed for the evolution towards a new “Food System Model” based on a strong and sustainable rural environment that generates jobs and that is effective in the fight against depopulation.

We are an essential sector that has not reduced its production pace, even during the pandemic, and we are committed to ensure the supply of healthy products to the society and to health security. The professionalism of the sector, the work well done, animal welfare, biosecurity and the observance of the regulations, makes the Spanish pig sector a world power.

Thanks to all the sector for carrying out an EXCELLENT job.

These Christmas holidays our wish was to join all the Agroalimentaria Chico family and share ...

Duroc pork for a healthy diet

The close relationship between health and diet is obvious. A healthy nutrition model is key ...

Agroalimentaria Chico at the Salón Gourmets

It was not possible last year, but this year we have finally been able to ...

Line for the Promotion of Innovation in SMBs – Hermanos Chico Galindo

The company HERMANOS CHICO GALINDO, S.A. has been the recipient of an aid granted by ...

Aid granted by the Institute for Competitiveness of Castile and Leon

The company HERMANOS CHICO GALINDO, S.A. has been the recipient of an aid granted by ...

We are proud to announce that Hermanos Chico Galindo has obtained the following certificacions: IFS ...

Read more
Artículo anterior
Artículo siguiente
We use cookies on our website to give you the most relevant experience by remembering your preferences and repeat visits. By clicking “Accept”, you consent to the use of ALL the cookies. However you may visit Cookie Settings to provide a controlled consent.
Cookie settingsACCEPT
Manage consent

Analytical cookies are used to understand how visitors interact with the website. These cookies help provide information on metrics the number of visitors, bounce rate, traffic source, etc.

Advertisement cookies are used to provide visitors with relevant ads and marketing campaigns. These cookies track visitors across websites and collect information to provide customized ads.

Any cookies that may not be particularly necessary for the website to function and is used specifically to collect user personal data via analytics, ads, other embedded contents are termed as non-necessary cookies. It is mandatory to procure user consent prior to running these cookies on your website.